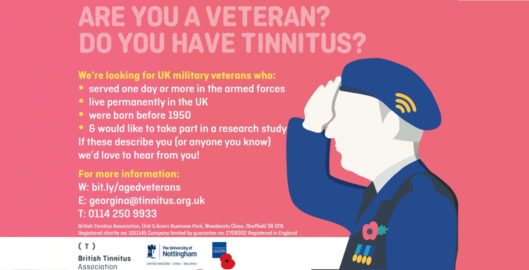 The British Tinnitus Association are currently contributing to a research project exploring the impact of tinnitus on aged veterans. The project is managed by the Royal British Legion and funded by the chancellor using the Aged Veterans Fund.

Tinnitus in aged veterans is a subject which has not been researched before in the UK so they are looking for participants to take part and/or share the information about the project with your family/friends who might be interested.

If these describe you (or someone you know), your participation would be highly valuable. You can take part by completing a survey which you can find online here:

Alternatively, the questionnaire can be posted to you for you to complete and return using a freepost envelope. To request a paper version of the questionnaire, you can call 0114 250 9933 or email georgina@tinnitus.org.uk

This research which is exploring the impact of tinnitus on UK military veterans who have tinnitus and were born before 1st January 1950 is a collaboration between the BTA and Dr Derek Hoare at the University of Nottingham and is funded by The Royal British Legion using the Aged Veterans Fund, funded by the Chancellor using LIBOR funds.

The next steps will be to continue reaching out to aged veterans with tinnitus to let them know they can have their experiences heard about how tinnitus impacts on their life. From November, there will be some informal interviews and focus groups to get some further information about the impact of tinnitus on aged veterans. If you would like to take part in any stage of this research, or know anyone who would, or you would like some questionnaires to be posted out to share, please contact Georgie on 0114 250 9933 or georgina@tinnitus.org.uk