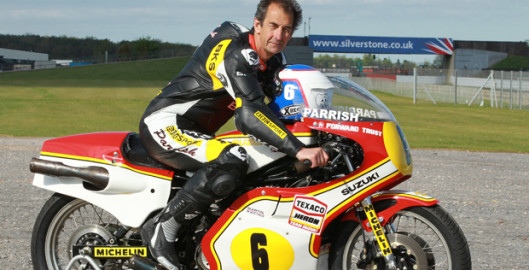 FORMER motorbike racer Steve Parrish used to pride himself on his ability to tune engines but he had no idea that constant exposure to his bike’s roar would give him long-term hearing problems.

“I fell in love with engines and motorbikes at the age of 11,” says Steve, 59. “I was brought up in the Hertfordshire countryside and would pull the exhaust pipe off to make the bike sound louder and more racy.”

The three-time British motorbike championship winner would shun ear protectors as he revved and tweaked the engine of his Yamaha 250cc machine.

In 1976 Steve turned professional at the age of 22. He signed with the Suzuki Grand Prix team and won his first British Motorcycle Championship title two years later.

Over the next decade he was exposed to the noisy world of racing for 30 hours a week and didn’t think to protect his ears.

“I’d spend all day Saturday and Sunday racing and practising and then during the week I’d be in my workshop surrounded by noisy engines,” says Steve, who now lives on the Isle of Man with his girlfriend Michelle, 48, a floor manager for the BBC.

I remember revving up my Yamaha bike, which without a silencer is about 125 decibels (dB). Not wearing earplugs was natural because I could hear exactly what the engine was doing.

He only realised the extent of his noise-induced hearing loss (NIHL) when he retired from the sport years later. “I was only 32 but had lost 30 per cent of my hearing,” says Steve, who is now a BBC motorsport commentator.

NIHL is caused by either a one-time exposure to a very loud sound of 120dB or more, such as a firecracker, or repeated exposure to loud sounds (85dB or above) over an extended period.

Harmful levels of noise can damage hair cells in the ear that convert sound energy into electrical signals that travel to the brain. Over time this can result in hearing loss.

Normal office noise is classed as moderate at 50dB. An electric shaver and alarm clock are loud noises at 80dB, a motorbike is around 100dB and rock concerts are even louder at 115dB.

The Who guitarist Pete Townshend has talked about his severe hearing loss and tinnitus from years of playing next to loudspeakers on stage.
The band was even awarded the title of “loudest band in the world” in 1976 for a gig at 120dB.

Steve is one of 180,000 people in the UK aged 35 to 64 suffering with severe hearing difficulties due to noise at work. Yet he was only alerted to the dangers of going without earplugs in 1987 at the end of his career.

“I was at Donington Park Racing Circuit where there happened to be a hearing specialist carrying out tests,” he says.

He wore a headset playing various frequencies and indicated which ones he could hear. The doctor said Steve had lost 30 per cent of his hearing.

“I was surprised that I could have hearing issues at 32. I started wearing ear defenders there and then,” says Steve, who soon swapped bikes for truck racing, claiming five world titles driving the giant lorries.

His hearing loss became a daily annoyance. “I struggled with high pitched sounds, such as an alarm going off.”  It also affected his job as an expert witness for motor racing accidents. “I’d sit in court struggling to hear what lawyers and judges were saying,” he says.

For the past year he has worn the Phonak Lyric hearing aid, the first hearing aid that can be worn continuously for three months.

Inserted and later replaced by an audiologist deep in the ear canal, the 12mm long device is placed about 4mm from the ear drum.

It allows the outer part of the ear (the pinna) to process sounds naturally helping the wearer determine where sound is coming from. Users are given a key-fob which contains a black magnet and works like a remote control to adjust volume levels and switch the device on and off.

Steve says: “It took a few days for me to get used to the hearing aid but it has made living my frantic life much easier. I can even hear the clicking of the indicators on my car.

To those worrying about wearing a hearing aid I’ll say this, if you don’t do it for yourself do it for your friends and family because not having to constantly repeat themselves makes their lives a whole lot easier too. 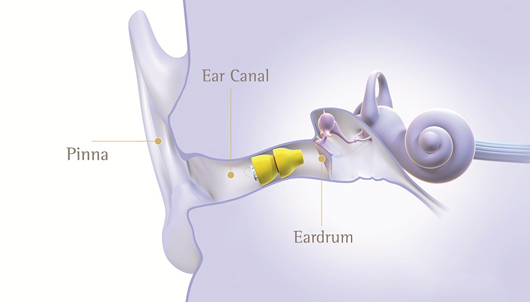 Lyric is the result of a unique collaboration between a group of ENT physicians, audiologists, and engineers. It was launched commercially in January 2007 but has been extensively studied in hundreds of clinical research patients since 2001.

Audiologists who have completed all training required by Phonak are deemed as Lyric Qualified Professionals. We are one of only three clinics in London who are able to offer the Lyric and currently have 4 trained, competent and experienced Lyric practitioners. Patient motivation is extremely high and we are experiencing great success with Lyric.

Lyric is suitable for people with a mild to moderate hearing loss. In order to know if Lyric will work for you, you must be seen by your Audiologist, who will conduct an examination of the shape of your ear canal, review your medical history, lifestyle and communication needs with you.